The geographic position of Gwennap Head means that it is strategically important for wildlife, both marine and land-based. From our lookout we can see north-west to Lands End right round to the Lizard peninsula, taking in the Isles of Scilly, Wolf Rock and part of Mounts Bay. Our scope for seeing wildlife is enormous as we scan the sea and cliffs during our normal work routine. Here the English Channel meets St. Georges Channel and much of the wildlife we see is travelling from one place to another. It may be undergoing seasonal migration, movement between feeding sites, or returning to favoured areas after being displaced by gales or strong ocean currents.

For example, seabirds move away from their colonies after breeding, and head for places where they can moult safely and find winter feed. The most common seabirds we see are Gannets, Shags, Cormorants, Razorbills, Guillemots, Fulmars, Manx and Balearic Shearwaters, Kittiwakes and several other species of gull. Puffins, Skuas and Storm Petrels are seen too in lesser numbers. We can add to these others that are much rarer and occur after certain weather events, like Great Shearwaters that breed in the South Atlantic.

Migrating waders, ducks and many small birds, like finches and larks, are among many species of birds which follow a coastal route during migration. They must cross the English Channel as they go north in spring to breed or south in the autumn to winter quarters. Visible overhead migration is often spectacular in the early mornings of late Ocober and early November, involving hundreds and thousands of birds, some flying so high that you can only hear them call. We see a great variety of birds at peak times (May and October) including some rare ones. Of these, possibly the most exciting was undoubtedly the presence of a Dalmatian Pelican in the area, between Porthgwarra, and Drift Reservoir. On occasion it could be seen from our headland, when it resembled a small plane gliding around in graceful arcs at low altitudes! 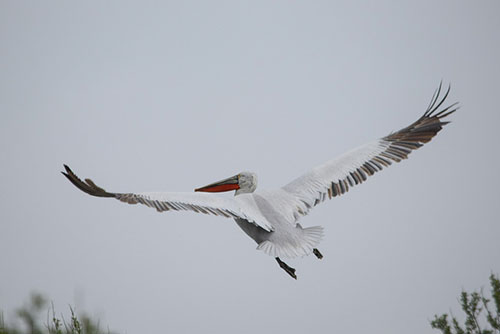 West Cornwall now has a healthy population of Choughs and we have a pair breeding nearby that sometimes feed on the turf near the lookout, but they can also be elusive. For those that haven't seen them, yet, this is what our pair look like: 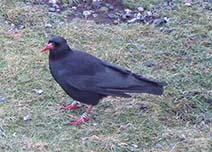 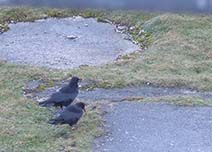 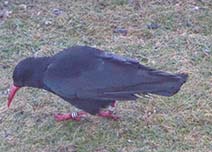 Light cattle grazing from May to September has been introduced here on Gwennap Head to benefit the fledged young that feed on insects associated with the dung. Ravens breed locally, as do Carrion Crows and Jackdaws, the latter nesting colonially in the cliffs below the lookout, and during strong winds they play in the air currents in front of us. Also taking advantage of these, resident Fulmars cruise the cliff-top with unmatched grace.

Over the years we have recorded many species of whales and dolphins, from the second largest in the world, the Fin Whale, to one of the smallest, the Harbour Porpoise, of which there is a fairly substantial resident population in our waters. Humpback Whales, Orcas, Minke Whales and Pilot Whales are included in the list. We regularly see Common, Risso's and Bottlenose Dolphin, and even the much rarer White-beaked Dolphin. Some oceanic species travel hundreds of miles between the Bay of Biscay, the Irish Sea and the English Channel. Unless they are travelling from one place to another, they are usually here because there is food, and the best way to look for them is when seabirds gather to form large feeding flocks offshore. Basking Sharks, Thresher Sharks, Ocean Sunfish and more rarely Leatherback Turtles have also been seen from the lookout. 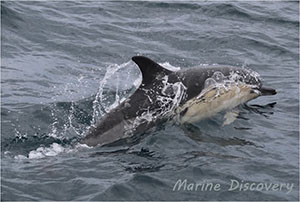 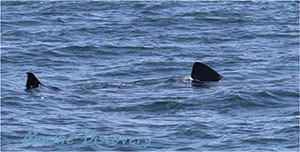 Unfortunately, we often see harassment of sharks or dolphins by boats or by people in the water and we encourage visitors to report bad behaviour to the local wildlife trust or the wildlife police. This is why we may be reticent when asked by boatmen whether we have any in view, although most act responsibly.

We see few mammals. Apart from mice, voles and rabbits, our list includes Roe Deer, Grey Squirrel, Mink, Stoat, and numbers of Grey Seals which haul out on the rocks below on low spring tides. 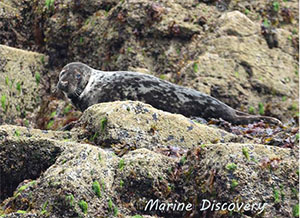 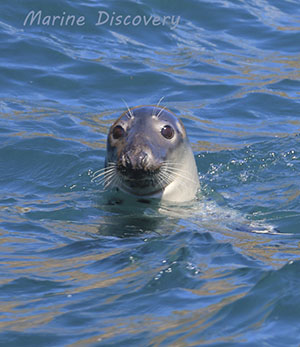 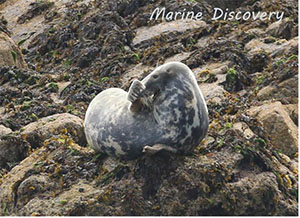 Like birds, some insects cross the sea during migration, and it is possible to see butterflies, moths, dragonflies and even bees flying in from, or heading out, to sea. Red Admirals, Clouded Yellows and Painted Lady butterflies, Humming Bird Hawk Moths and migrant Hawker dragonflies are among many that are reported annually.

The headland is composed of granite which is generally poor for the number of plant species, but in spring, flowers can be spectacular. There are carpets of Spring Squill in April/May on the short turf and in May/June Sea Campion, Sea Pink and Kidney Vetch festoon the cliff tops and spill down rocky gullies. In June/July purple and pink heather flowers among the Western Gorse making a vibrant patchwork of colour that positively glows in the sun. Every year the abundance of flowers reflects the weather of the previous year.

Lastly, as everybody knows, West Cornwall is a land of myths, legends and folklore. However, visitors who think that the only startling sight which they might see at Porthgwarra is Aidan Turner with his kit off (!), might have to think again. As the picture below shows, we appear to have our very own Monarch of the Cliffs - definitely not a sight which we’d expect to see here!

There have been several sightings of this guy (a mature Red Deer stag) on the cliffs around the Cove area, quite often in the company of grazing cows. Our wildlife officer says that, although there have been regular sightings of a small group of four Red Deer in the area, for the last three years, nobody knows where they came from. Sadly, there don’t seem to be any more around so, maybe he’s just lonely!

Anyway, if you’re walking in the area of Gwennap Head and suddenly think that the heather has sprouted a [big] pair of antlers, don’t worry, you’re really not seeing things 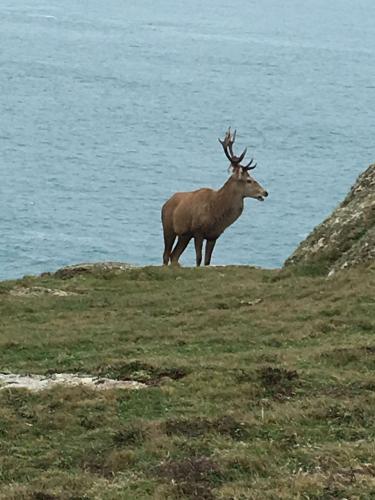 With grateful thanks to Jean Lawman, wildlife expert and honarary member of NCI Gwennap Head