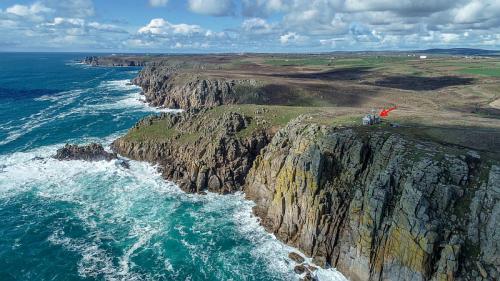 Gwennap Head lies at the very south west tip of Cornwall and West Penwith, a few miles south of Land’s End (although it is debateable which is the true lands end of the country!). South of us, over the horizon, lie France and Brittany. To the west, the Scillies, often visible from this stretch of coast, and between the two, the vast Atlantic Ocean and the Americas.

From Gwennap Head there is a spectacularly panoramic view of the sea and, through the seasons, we witness every possible sea state, weather-mood and light condition.

There is always something to be seen; passing sea birds, gannets diving for fish, men in cove boats fishing single-handed for mackerel or bass, near the Runnel Stone, larger boats heading out for a day’s work, trawlers setting off for several days at sea and yachts passing by on trips to places unknown

An idyllic location….but it has another darker side!

At Gwennap Head we watch over one of the most dangerous stretches of water in the UK. With Wolf Rock Lighthouse and the infamous Runnel Stone Reef close by, this treacherous coastline has seen many shipwrecks and lives lost. On good days we can see as far as the Isles of Scilly, or the peaks of the legendary Lyonesse.This far South West coast of Cornwall from Land's End around to Porthcurno is a wind swept rocky place which bears the brunt of the Atlantic storms as they crash against the towering granite cliffs. It is an area littered with shipwrecks and tales of smugglers and witchcraft.

A Traffic Seperation Scheme exists around the Isles to control the navigation of vessels in this congested area. Together with Cape Cornwall NCI, we are able to provide visual, radar and AIS coverage of this very busy zone. As well as the large commercial vessels we identify and log the many fishing boats, pleasure craft, kayaks and dive boats in the waters around our station. There are three Traffic Seperation Schemes (TSS) off Scilly - to the east (between the Isles of Scilly and Land's End) to the south, and to the west; these control the navigation of all vessels joining, transiting, crossing and leaving the schemes. In the area between each TSS and the adjacent land there is an inshore Traffic Zone, from which all traffic is prohibited. Traffic is relatively dense in the east TSS, but the tidal stream generally runs parallel to the coast, whereas the south and west TSS's are more exposed to westerly swell, and the tidal stream generally run perpendicular to the Isles Of Scilly.

Just below the watchtower, a pile of granite, The Chair Ladder, is considered to be the finest mass of stone in the county; it appears as if built up from large cubical blocks. Numerous caverns and isolated rocks can be found along the shores of these cliffs. The granite of Tol Pedn, Penwith is very porphyritic, and most of it contains pinite. This is intersected by veins of a different kind of granite; in most of these veins the feldspar is red. This, and the surrounding cliffs are a magnet for climbers from all over the world particularly in the summer months. Another thing for the NCI to keep an eye on. We watch out for these climbers and also the many walkers and bird watchers on the coastal path.The Lands End Cliff Rescue Team use the cliffs as a training centre.

Porthgwarra is a pretty little fishing cove, nearby to Gwennap Head. It's name ( meaning 'The Higher Cove`) is generally considered a corruption of the original 1302 name Porthgorwithou, literally translated as  The Cove by Wooded Slopes. There are tunnels cut through the rock to give access to the beach.Some say these were used to help with the 'freetrade' or smuggling in olden days. The following paragraphs are taken from 'Porthgwarra' by Christine Gendall.

Cornwall has a historic reputation fo smuggling. I find it hard to accept that fishermen and farmers would lure ships ashore by false use of lights. Though I do believe that they may have been involved in some illicit trading in spirits and tobacco. If there was a wreck, they did their utmost to help the crew get ashore..... but were then swift to assist in the salvage!

I have spoken to Jean Hey (nee Rawlings) and David Williams, both of whom played as children at Porthgwarra. They remember playing in a smugglers' cache, a hiding place on the cliff top, inland from Hella Point some distance behind the marker cones. In recent years they have independently searched to try and find the top entrance of this rock covered cave, but have been unsuccessful due to profusion of the undergrowth.

Sadly, the truth about these tunnels is a bit more prosiac! Around 1880, the tunnel was built by St Just miners, primarily, to improve beach access for the local farmers, who would collect and remove seaweed, for use as fertiliser on their potato crops. Apparently, the farmer’s horses, pulling the seaweed-laden carts, found the fairly steep tunnel floor slippery and a lot of effort was needed to persuade them to go up the tunnel!

In actual fact, the main tunnel had two different apertures, in a figure-of-8, until the intervening floor collapsed – which may or may not have happened during the Mount’s Bay earthquake of 1996....yes, on the 14th  November, at 09.30, we had our very own earthquake, centred on Mounts Bay and registering an earth-shattering (well, actually, more like jelly-wobbling!) 3.8 on the Richter Scale. As one local paper put it:

“Windows rattled and loose plaster fell from houses and animals were alarmed, but there were no reports of injuries or serious damage to property.
The most it did was to move pictures on walls and shake items around on tables and cabinets.”

Until recently a moaning sound could often be heard over the area of Gwennap head. This emanated from the buoy which Marks the Runnel Stone (previously called Rundle) - a hazardous rock pinnacle about a mile offshore between Hella Point and Gwennap Head The buoy is now topped with a flashing light and a bell, which peals with the movement of the waves. The moaning came from a whistle set in a tube which sounded when there was swell running. This was recently removed from the buoy by Trinity House.

Today the Runnel Stone draws divers from all over the globe who come to explore the many wrecks which have come to grief at this dangerous spot.

Near the NCI station on the cliff top and in line with the buoy, there are two cone shaped markers. Despite local stories, these are not rockets or our last line of defence. They are day markers warning vessels of the hazard of the Runnel Stone. The cone to the seaward side is painted red and the inland one is black and white. When at sea the black and white one should always be in sight..... but if it is completely obliterated by the red cone, the vessel would be on top of the Runnel Stone! A plaque on the black and white marker cone reads.......

THIS BEACON WAS ERECTED BY THE COPORATION OF TRINITY HOUSE OF DEPTFORD, IN STROUD 1821 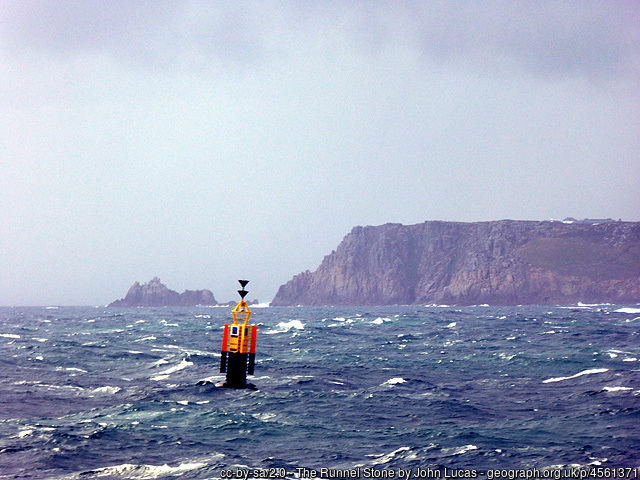 Wolf Rock
7.5 miles off Gwennap Head, this rock was a constant danger to shipping. A number of attempts to put a beacon on the rock were made between 1795 and 1850, finally a lighthouse was built on it between 1862 and 1870. The rock is particularly dangerous, as there is deep water virtually all around it. A swell surged over the rock in good weather, so the construction was very difficult. The stone blocks were cut, shaped and fitted in Penzance. Just over 1000 tons of rock was needed for the base, and 3300 tons of granite used for the tower.

The first 39 feet of the tower is solid,there, a 7ft 9inch wall starts then tapers to 2ft 3inches by the time it reaches the top of the tower, some 116 feet above the rock. The final stone was put in place in July 1869, and the light first shone in January 1870. The oil powered light was replaced by a generator powered electric light in 1955. With a range of 23 miles, the signal is one white flash every 15 seconds, and there is a fog signal belting out every 30 seconds. Today the light is unmanned. 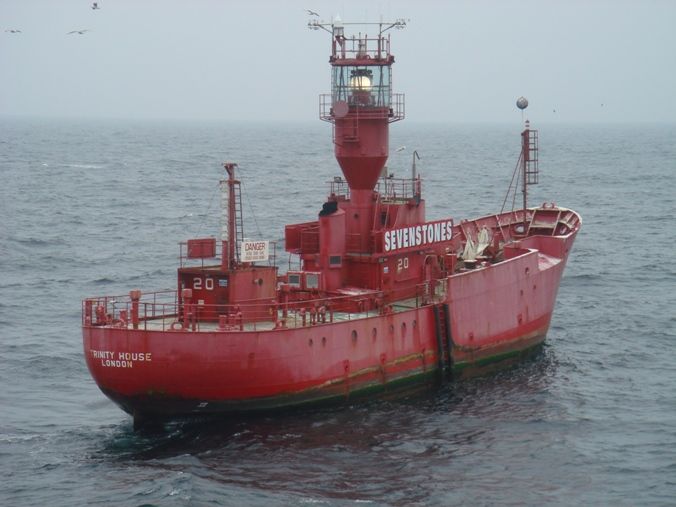 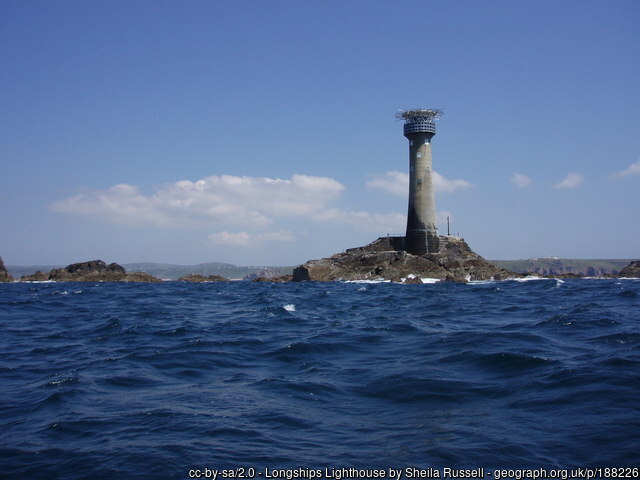 Samual Wyatt, a Trinity House architect, achieved the remarkable engineering feat of getting light on Carn Bras (Big Rock), the biggest of the Longships rocks. He built the lighthouse at Sennen where each stone was methodically marked and then moved out to the rock between 1794 and 1795.

Lands End
The Lands End peninsula and the Isles of Scilly have almost certainly been Britain's first landfall for more generations of homecoming mariners than any other part of the British coast. Variously known as the Western Approaches or, to the old seamen, 'Chops of the Channel', this area has more recently been christened 'The Celtic Sea' - and maybe this modern title rings truest of all, for it was on this land, bordering these tempestuous waters, that Celts made their last stand against the invaders.

Generations of coastal dwellers have laboured on these waters, their origins rooted deeply in the creeks and inlets. The atmosphere of the long ago lives on along the granite of the coastline. Today the modern Land's End has a visitors centre with many attractions but it is still the draw of Land's End itself, which brings the many visitors every year. 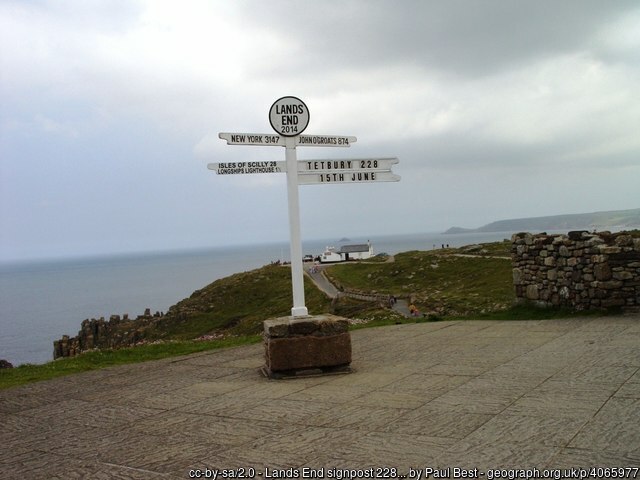 Dangerous Waters
Gwennap Head has always been a prime position for watching over this rugged part of the Cornish coastline. The convergence of tides between St George's and the English Channels make this one of the most dangerous stretches of water in the UK. With the Wolf Rock Lighthouse and the infamous Runnel Stone reef close by, this dangerous coastline has seen many shipwrecks and many lives lost. The Runnel Stone has always been particularly treacherous for shipping.

The number of ships which have come to grief on the Runnel Stone reef and the rocks  around Gwennap Head are legion, Below are just a few of the many instances

On a clear day you can see for miles, from Lizard Point, to the Isle of Scilly, to Land`s End peninsula - a spectacular panorama. When the mist creeps in from the sea and you hear the sound of the Runnel Stone buoy you are reminded of smugglers, wreckers, witches and the dark tales associated with them. Whatever the weather, we believe Gwennap Head is situated at one of the best spots in Cornwall.