'Twas a dark and stormy night. The wind howled around the lonely coastwatch station perched on the towering lands end cliffs of "Gwennap Head". As if to force the wreathing fog through doors and windows, through gaps in the old cornish stone, whistling around the seaweed festooned flag staff, phospherescent and gleaming white, as a skull in the light of a hunters moon.  The station stood sentinel as it had done for a thousand years, watching over a brooding sea and the graves of ten thousand ships and a million lost souls.

Captain Symons stood grim faced over a chart of southwest Cornwall and the Western Approaches. His good leg braced against a binnacle. his other jammed in a knot hole in the rough planking deck of the watch tower as she shuddered in the wild torment of the wind and spray....."Ark to me lad, tis a night when terror rules the foam" he said.

The bosun, a young lad name of 'Arrison clasped a brass bound telescope to his good eye and peered into the doom laden mist. The knuckles on his good hand were white as he stroked the newly grown downy fluff which adorned his finely chiselled features. A mournful cry echoed across the sea and Captain Symons, his face drained of colour, clapped his one remaining hand to his one remaining good ear. The bluff sea dog strained to catch the lonely cry as it echoed from the gaunt cliffs of Chair Ladder. Was it the tolling of the bell on the Runnel Stone Buoy or was it the wail of lost souls of ghostly cattle that are said to roam from Lands End to fabled Atlantis? Searching,searching for the cold lifeless bodies of the walking dead and the warm hands of a young milkmaid.

OK. So it was another beautiful Cornish summer morning. But it w'ont sound half as good.

The RMS Scillonian on it's outward journey bound for Scilly slid past the Runnel Stone Buoy and the Captain's voice could be heard (probably) over the public address system "on the starboard bow, the NCI Coastwatch Station of Gwennap Head". His voice could almost be heard above the cry of the gulls across the translucent sea. What could however be heard was the voices of the 50% of day trippers "There's a cow down the cliff".

That cry heralded the beginning of a quite unique rescue, one that Land's End cliffs had never before seen. The morning issue of 'The Cornishman' had a front page story, plus photograph of the imminent rescue scheduled for that day, of a cow, which, having wandered down an ever diminshing cliff path had then fallen onto a rocky ledge just above the sea. It had become stuck with no way of regaining the cliff top;one hundred and fifty feet above. Although it had remained there for several days and nights. It had been monitored by the coastwatch and coastguard cliff rescue, the latter having, at danger to themselves, been able to rope down the clifface and feed the stricken animal. Gradually as it grew weaker there was little chance of its survival and it was still being reported to the coastwatch station by both climbers and passing boats. Concern from both the public and the R.S.P.C.A. was growing and the inintiative for a concerted rescue attempt by several of the rescue agencies which patrol our part of the Cornish coast was put into practice. 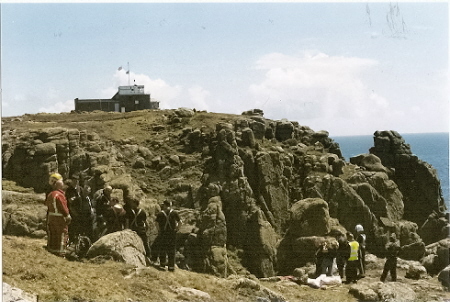 A team of R.A.F. Rescue specialists attached to the helicopter squadron at RNAS. Culdrose on the Lizard Peninsular arrived at the watch station and were shown the accident site enabling them to perform a risk assessment. It was agreed that a Rescue Helicopter would be deployed and flying into the cove along the base of the cliffs would attempt to lift the beast by winch.It was also agreed that the whole operation would be treated as a cooperative exercise involving the RNAS with the other rescue teams and that thanks to the Ministry of Defence and other powers that be, no expense to the tax payer would be involved.

By the early afternoon the beautiful cliffs of Gwennap Head were thronging with expectant sightseers. Obviously 'The Cornishman' has a vast readership. Above the rescue site itself the coloured helmets and uniforms of the rescue teams wove patterns as they busied themselves with pitons, ropes, slings and all the other apparatus essential for 'A Great Bovine Lift Off'

The Coastguard Cliff Rescue Team, The Fire Brigade Accident Team, the Fire Brigade Specalist Animal Rescue Squad, the R.S.P.C.A., Animal Welfare Wildlife Experts and the Ministry Vet were all on hand and working together as one amazing united team. (unfortunately St Buryan Male Voice Choir and a team of Morris Dancers from Helston were held up in the mounting traffic along the country lanes leading to Porthgwara) I doubt whether they would have been much use in the event, save to distract the unfortunate animal from its imminent maiden flight. The teams that had arrived though were superb.

The vet was lowered down the cliff face and the cow swiftly tranquilised. A time frame of only minutes was given between injection and lift off and within seconds the helicopter appeared flying low under the towering cliffs. As it hovered a cargo net and sling were attached, and the aircraft, with its passenger dangling 50 feet below, soared into the sky and inland to the farm from whence the patient came. Orange smoke flares drifted across the moorland, giving wind direction for the helicopter crew to lower their burden onto straw bales in an adjacent field. 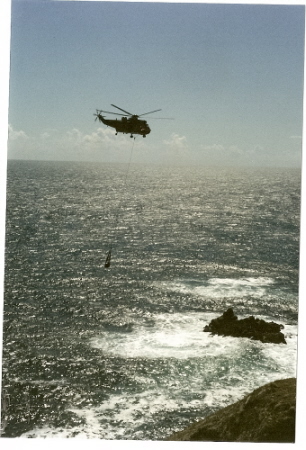 I'm sure there was a happy ending and after a swift recovery, a stiff gin and a twix bar it was off to the milking shed for a well earned massage. The television crews, photographers, journalists and public too went home happy. Was it a cow? Was it a bullock? Was it a steer? "The Cornishman" covered all aspects in its story. Whatever it was, hopefully it did not enjoy it's experience too much and won't be tempted for a repeat performance ....... Watch this space

So now as you sit at home and through the marvels of local and national television relive the drama as it unfolds spare a thought for the lonely coastwatch operatives as they scan the horizon helping to keep the local Cornish waters safe for all merchant, fishing and pleasure craft. Watching over lone walkers, cilmbers, bird watchers, recording wldlife,................. particularly that fabled ghostly herd from far off sunken Lyonesse. As they stand poised, sun bronzed as the brassy sun beats down. Eyes (good one, that is ) narrowed against the hot wind from the azores, sweat patches forming on their otherwise pristine white uniform shirts, a weather ear cocked for the faint call of a hundred scillonian tourists  -    Bullocks!!!!

very tongue in cheek by KEITH HARRISON, a Watchkeeper there on the day, Thursday 3rd July 2008.

We then had a deja vue situation as on another day; 16th July; another cow went over the cliff and a repeat performance took place.

As a precaution until further negotiations and considerations the cows were removed from the cliffs for a short period but have been roaming around this past year without incident.