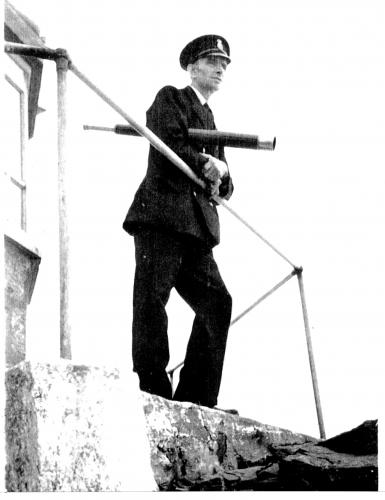 Many visitors to our watch station (and some watch keepers) have remarked on the photograph of a gentleman in Coastguard uniform at the lookout and wondered who he was. His name is Thomas Edward ‘Eddie’ Williams and he was the Coastguard at Cape Cornwall during the Second World War.

Eddie Williams joined the Royal Navy in 1924 as a boy seaman aged just 16 and over the next 15 years served on a number of ships including HMS Dauntless, Impregnable and Ramillies amongst many others. In 1938, he left the Royal Navy and joined HM Coastguard with his first posting being Linney Head in Pembrokeshire. In 1939, Eddie was posted to the Cape Cornwall Coastguard station where he soon became a familiar figure cycling from the Coastguard houses in Bosorne Street to the watch station at the cape armed with his ‘Tuck Stick’.The Coastguards Tuck Stick concealed an 18” spike which was traditionally issued to enable Coastguards and Customs Officers to probe goods for illegal bounty stowed amongst regular freight in ships holds, and this, along with his .303 rifle, was his only means of keeping the German invasion at bay! Although Cape Cornwall was not itself a target it did see some excitement during the war and the lookout was strafed on several occasions by incoming German planes. Eddie always believed that the enemy was just testing their guns at a convenient target, but that didn’t stop him having to take cover on the floor. He was also able to observe German dive-bombers attacking shipping in the area and even to report tinfoil being dropped by enemy aircraft to disrupt radar. But the regular work of the coastguard also continued during the war and Eddie was awarded a medal by the RSPCA for climbing down a 150’ cliff to rescue a stranded dog.

After the war, Eddie Williams was promoted to Station Officer and left Cape Cornwall to take up posts at Bosherston in Pembrokeshire, Tenby and later at Caldey Island. In 1959, Eddie took up the position as District Officer (Needles) from where he controlled all of the Coastguard stations between Poole and Portsmouth and including the Channel Islands. Two years later he was posted to Swansea as District Officer (District HQ). Here he was involved in a project with the Atlantic College to develop a small boat that could be quickly launched and reach the areas where the big lifeboats would be restricted by their draughts. Working with Avon Rubber, a prototype was developed which evolved into the fleet of inshore lifeboats that we have today. For his work on this project, and to mark his total service, Eddie Williams was awarded the MBE in 1972. 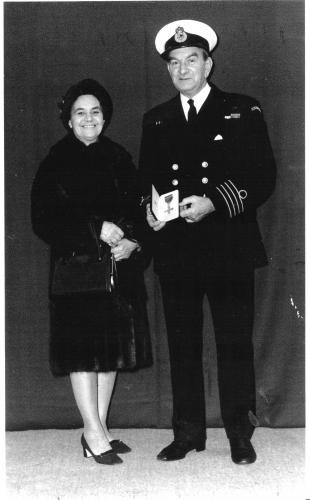 Mr Williams receiving the MBE in 1972 (with Mrs. Williams)

Eddie Williams was the first Coastguard to be promoted from the ranks to the post of Inspector of Coastguards, in charge of the Coastguard stations in Wales, the West Country and the Channel Islands. Eddie finally retired in 1973 after 35 years service with the Coastguard and enjoyed a long and happy retirement until he sadly passed away in 1997. His wife Phyllis, his sons Derek and Alan and his daughter Christine survived him. His ashes were scattered at sea by the Mumbles lifeboat. I am indebted to Eddie’s son, Alan Williams, for allowing me to share the information he supplied about his father.