The Lookout station at Cape Cornwall is a former HM Coastguard lookout station, which was closed along with most of the other Visual Watch Stations here in the Southwest in the late 1970’s. Cape Cornwall kept going a little longer than most as it remained open part-time as a Bad Weather Reporting Station but it too finally closed in 1981, although it was occasionally used as a Dolphin Watch.

In 1996, representatives of National Coastwatch Institution visited St Just where they held a public meeting and called for volunteers to help set up a new station. In early February 1996 these volunteers set about restoring the lookout, often working in gale force winds with no electricity, running water or telephone. After much hard work, the damp and mildew was cleaned away, the utilities and equipment installed and the old Lookout station was restored to a working condition. The station had its formal opening on 6th April 1996 and NCI Cape Cornwall became operational in late 1996 although it was a very different Station compared with today. 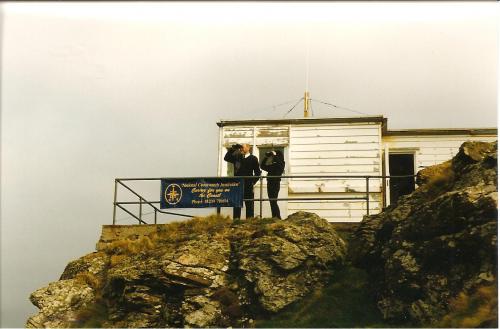 The very first watch in 1996 - with Annie and Peter

The early watch-keepers managed to do a sterling job with just basic binoculars and very little else, but over the years the station has evolved and now we now we operate a range of optical equipment, supported by radar, radio, AIS and telephone. We also have a small visitor centre at the rear of the lookout which houses literature for those wishing to learn more about what we do as well as a range of merchandise which is sold to help fund the day to day costs of running the station. Visitors are always welcome and our Watchkeepers are more than happy to answer questions (subject to operational needs).

However, over forty years exposure to the elements on this exposed coast had taken its toll on the largely wooden building, and it was determined that only a major refurbishment could keep the lookout operational.

Raising the finances to enable the work to be carried out took several years and we had to negotiate a new lease from the National Trust but finally, in August 2012, we were able to start work. All of the windows and doors needed replacing and this involved extending the roof and replacing the exterior cladding of the building. The interior of the lookout also required a lot of work with a new floor being laid, the complete replacing of the electrical system, a new sanitary system installed and all of the interior furniture rebuilt. And all of this had to be finished before our technical equipment could be reinstalled and ‘tuned-in’ Watch Interior following the refurbishment in 2012

On 1st April, Mr Andrew George, the Member of Parliament for St Ives, officially re-opened the Lookout in a short ceremony. Amongst the guests present at the opening were representatives from Trustees, RNLI Sennen Cove, the Cornwall Wildlife Trust,and the Reverend Alan Rowell from Pendeen. Also amongst the guests was Annie Coak, who as the original Station Manager, had been instrumental in getting the station up and running seventeen years earlier. As a patron of the National Coatwatch Institution, Mr George expressed his admiration for the important contribution that the NCI makes to ensuring the safety of the public and the valuable assistance it provides to the Search and Rescue community. 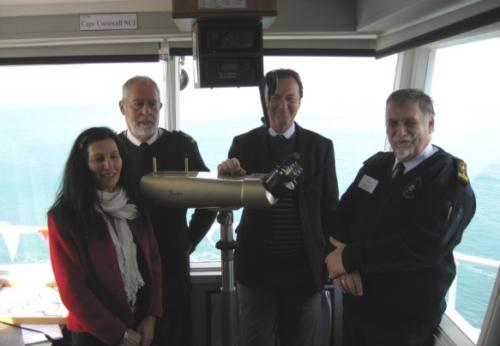