About the Lookout Station 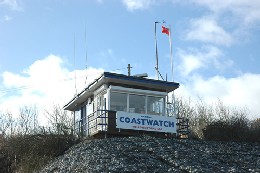 The watch-tower is ideally positioned overlooking the outer harbour tidal channel used by all shipping entering the picturesque North Norfolk port of Wells-next-the-Sea. As well as viewing local boats the tower affords a distant view of the east coast shipping lanes. 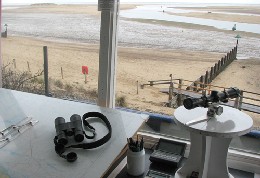 Watch-keepers also have the additional responsibility of observing those using the fine sandy beaches alongside the channel which when the tide is running is highly dangerous to the unaware.

The port of Wells has provided shelter for ships for at least 800 years. In common with a number of North Norfolk towns and villages it was in the past a very important trading port and indeed until recently small sea going cargo ships entered the port to unload and fill their holds.

Nowadays dozens of pleasure craft, large and small, depend on the shelter provided by the unique position of Wells, which despite its name is in fact over a mile from the open waters of the North Sea.

As well as the sailing and motor boats used by holiday makers the port is home for a number of working craft including a small fishing fleet, a number of boats serving the growing number of off-shore wind-farms and those engaged in taking tourists on a variety of trips.

NCI, Wells currently has around 50 watch-keepers who maintain a visual look-out nine hours a day (seven during winter months) 365 days a year. The station is unique in that it is managed by an elected committee of seven watch keepers, each sharing part of the workload and providing support as and when required. 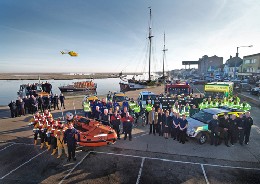 Excellent and important relationships have been developed with HM Coastguard, with the local RNLI, the Harbourmaster and within the local community generally. Fundraising has been well supported which in turn has enabled the facilities at the look-out to be gradually developed and improved.