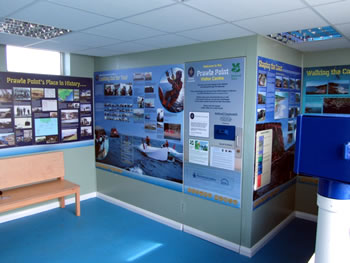 Visitors will now be able to gain a wide view to seaward through the new observation window, follow progress of shipping on a radar screen, on the chart table and through the newly installed telescope and even consult a weather station for current local conditions. Incidents, in which NCI Prawle Point has been involved during the current year, are listed chronologically, National Trust stewardship of the area is explained and walkers can consult a walking map of the Prawle and Beesands area. The display panels, professionally produced by Devon Wildlife Enterprises and Freeline Graphics, offer a wealth of information providing a most attractive facility for coastal walkers and an inspiring learning resource for young visitors.

Six panels with highly informative text and stunning photography cover ‘Looking Out to Sea’ with images of local features and oft-sighted vessels, ‘Wildlife’ depicting with amazing colour definition and close detail, the abundant flora and fauna of the area, ‘Prawle Point’s Place in History’ showing shipwrecks, battles, archaeological discoveries and the history of the station as a Lloyd’s Signal Station and coastguard base plus early stages of NCI occupancy. A panel entitled ‘Looking Out for You’ shows the Search and Rescue involvement of Lifeboats, Coastguard Rescue teams, Rescue Helicopters and the Air Ambulance and explains the ‘Eyes and Ears along the Coast’ ethos of the 44 NCI stations now established. ‘Shaping the Coast’ covers the fascinating geology which has formed this magnificent coastline and ‘Walking the Coast’ gives stunning views for walkers enjoying this beautiful section of the South West Coast Path.

Refurbishment was made possible through an award of £16,600 from Heritage Lottery Fund which recognised the unique natural, cultural and historical importance of this southernmost point of Devon. The Visitor Centre is open whenever Prawle Point Station is manned and admission is free.