NARE POINT STATION MANAGER RETIRES AFTER A DECADE IN POST 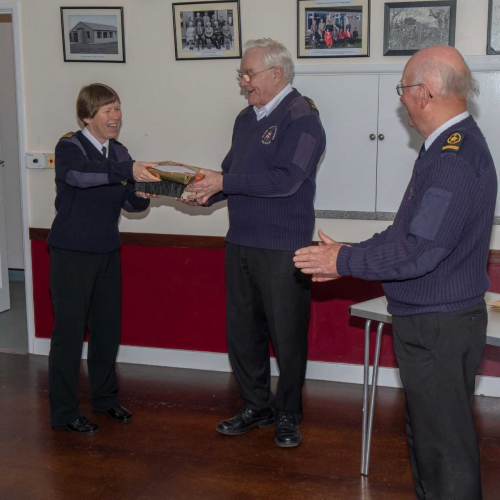 The Rev Len Jepp was one of the founder members of the watch team in 1997 when the station, housed in an ex MOD building at the mouth of the Helford, was first opened. Len brought his commercial shipping and sailing experience to the role of watchkeeper and his business expertise to that of running the station. Trained as a watchkeeper at Bass Point, the first ever NCI station, he soon became the Nare Point Deputy Station Manager and in 2009 took on the ultimate role.

The MOD station, now owned by the National Trust, was being used to store potatoes prior to NCI taking out a lease. Len worked with others to make it habitable and useable as a watch station. In his early days as Station Manager only two watches were kept per day for four days of the week. This soon increased to seven days a week and three watches during the summer. Len was active in installing shutters on the seaward windows and has overseen the 2018 extension and equipment refurbishment programme and his company generously provided the station with a new radar.

Len’s ten-year service as Station Manager, leading over 60 watchkeepers, was recognised by the presentation of a framed photograph of the station and a bottle of malt whisky. The presentation was made by Lesley Suddes, National Chair and Trustee of the NCI. Len’s Very large shoes are to be filled by Don Garman, currently the Deputy Station Manager and Training Manager. Len will continue as a watchkeeper and will run the Stations 50/50 Club which helps to meet the annual running costs.

Nare Point maintains a watch over the entrance to the Helford and Falmouth Bay from Black Rock to the Manacles. This is a busy location and over 20,000 vessel movements are recorded each year. Since January 2019 there have already been three incidents which have involved the station: two drifting dinghies which required launching of the Falmouth RNLI ILB and a commercial vessel with a dangerously loaded cargo. Watchkeepers also keep an eye on the Coast Path and wildlife and report sightings regularly to Cornwall Wildlife Trust.

The National Coastwatch Institution is celebrating its 25th anniversary this year having developed from the establishment of Bass Point as a NCI Station in 1994 following the death of two fisherman and the closure of the Coastguard lookout. There are now fifty-four stations around the coast of England and Wales. Stations are staffed by volunteers and each station raises its own annual running costs.

The photograph, courtesy of Cliff Malcolm, shows Station Manager Rev Len Jepp receiving a framed photograph of the station and a bottle of malt whisky from National Chair and Trustee of NCI Lesley Suddes while Deputy Station Manager, Don Garman looks on.