The shape of the English Channel results in the tidal range along the Dorset Coast being small. The tidal range increases from Dorset towards the Solent, 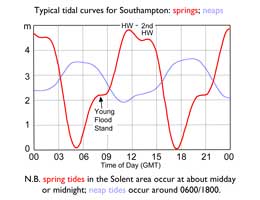 while the various tidal contributions from the moon and sun combine to given a more complicated tidal variation than observed elsewhere in the UK.

These effects are amplified within the Solent, and especially in Southampton Water, so Southampton has a unique tidal curve with, at spring tides, a pronounced "young flood stand", an extended high tide period with double High Water peaks, and a very rapid decrease in depth during the ebb.

As a result tidal currents in the Solent are relatively strong, and the tidal curve differs from place to place. For example compared to Portsmouth, high water at Hurst Point is over 1 hour earlier at spings, low water about 30 minutes earlier, and the tidal height up to 2m less.  If venturing on to the Solent, it is important to use tidal predictions close to your location. 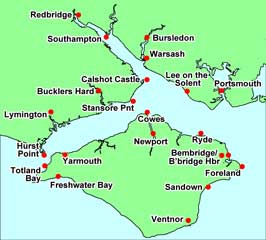 A nautical almanac (e.g. Reeds Channel Almanac) will allow the water depth to be calculated for a given times and positions.  For the Solent the tidal curves are referenced to the time of low water (at Portsmouth) since it is more clearly defined  than the time of high water.

The Hydrographic Office EasyTide web site will provide free tidal predictions for the next 7 days for the locations shown on the map.   The TideTimes web site provides the same predictions and is possibly easier to use. It will also provide free tidal data for past dates and sells printed tide tables.  Tidal predictions extending to the next 28 days are available from the National Tidal and Sea Level Facility (NTSLF) but only for standard ports (i.e. for the Solent, Portsmouth).

Various computer programs and mobile phone "Apps" (such as "Boatie") also offer tidal predictions and some also provide calculations of tidal currents. The accuracy varies between different programs, so it is worth checking that the results agree with Hydrographic Office predictions when first using them. 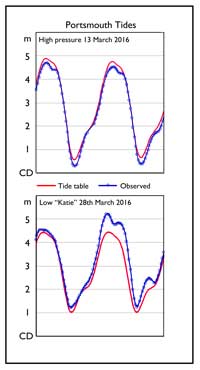 Meteorological effects on the tides are often ignored, however they can be important. Tidal heights will be less than shown in the tide tables if the air pressure is high and greater if the pressure is low. The graphs show an example of an anticyclone (high pressure) decreasing water levels, and of a low pressure area (storm "Katie") during which the associated storm surge increased the high tide level significantly. For anticyclones the water will be about 1cm less deep for every mb above 1013mb. In storms the corresponding increase in water height due to the low air pressure may be increased further by a storm surge originating in the English Channel.  NTSLF forecasts of departures from the tide table values are available for one or two days ahead, but the accuracy depends on the accuracy of the weather forecast. 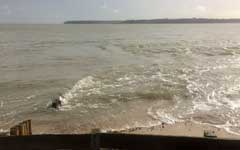 Currents in parts of the Solent are strong (see photo taken at Stansore Point) and can reach 3 kts or more.  The tidal stream "diamonds" on Admiralty Charts do not capture the rapid spatial variation which often occurs approaching the shore lines. The Admiralty Tidal Stream Atlas for The Solent and adjacent waters (NP-337) has more detail and is available online from visitMyHarbour separately for the East Solent and for the West Solent. More detail still is shown in atlas form in various commercial publications.

A very detailed, animated view of currents in the Solent and Southampton water calculated using a numerical model can be viewed on YouTube and predictions for specific days can be obtained from various commecial web sites by subscription. A simulation of currents around the Isle of Wight and currents in the Solent between Cowes and Lepe by the research branch of ABP shows how they change during the period of a spring tide.

N.B. NCI is not responsible for and cannot vouch for the accuracy or availability of the data sources and forecasts linked to from this web site.