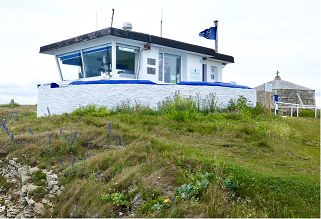 Originally there was a Coastguard station and a further store built in 1895 at St Aldhelm’s Head (see ‘St Aldhelm’s or St Alban’s’). More buildings were constructed inland at Weston, Worth Matravers, in the 1950s. To this day the Weston buildings are still used by the auxiliary Coastguard cliff rescue team. The present building was constructed for HM Coastguard in the 1970s, and when the Coastguard service ceased to man visual lookouts in 1994, the building was returned to the landowner, the Encombe Estate. Since 1995, the Encombe Estate has leased the lookout to the National Coastwatch Institution.

The NCI facility was opened in May 1995, thanks to the efforts of Mr Graham Roff, and was manned by local volunteers as a sub-station of NCI Peveril Point, Swanage. It became independent the following year and achieved Declared Facility Status in December 2005. In 2006 an Awards for All grant from the National Lottery allowed for a major refurbishment of the buildings, including the renewing and upgrading of some of the equipment in the station.

In 2012 the station was awarded the Queen’s Award for Voluntary Service.

The station is located 354 feet/107.9 metres above sea level on the Jurassic Coast World Heritage Site, between the major pleasure and commercial ports of Poole and Swanage to the east and Weymouth and Portland to the west. The horizon on a clear day is 19.47 nautical miles, with views to the Isle of Wight. Directly to the east is Anvil Point with its lighthouse, which produces a white flash every ten seconds. The coastline then sweeps westward, passing Dancing Ledge, and round in a bay to St Alban’s Head. This area is a popular spot for climbing in all its forms, coasteering, kayaking, diving and jet skis, as well as recreational sailors and commercial fishermen. The South West Coast Path runs right past the station and attracts many walkers and runners.

Immediately below SAH is the notorious St Alban’s Race. Then to the west of the station, the land sweeps past the Kimmeridge Ledges, through the military firing range area, to Weymouth and Portland. On a clear day the lighthouse at Portland Bill can be seen 15 nautical miles away. SAH works closely with the military firing range authorities. The range will inform the station daily of the firing arrangements for that day, and SAH watchkeepers will put up a red flag for them to warn seafarers that the range is active.  SAH announces the status of the range in the morning and evening broadcasts the station makes daily on channel 65.

The area round SAH is a haven for wildlife and attracts many birdwatchers. Dolphins are regularly spotted out at sea and playing in the race.

To contact the Lookout itself, during opening hours, (see below), please call 01929 439220.  Outside our normal hours, you may leave a voicemail, which will be actioned the next working day.   Please note that the Lookout itself is not equipped with e-mail facilities.

General enquiries to the Station, for example: potential membership matters, participation in future events, or for information on donations, are preferably handled by e-mail. Please contact [email protected]  - this e-mail address is checked frequently, but is not monitored 24/7.  Mail is reviewed and then actioned as necessary.

In case of maritime emergencies, out of hours: please call 999 and ask for HM Coastguard.

Visitor Policy
Visitors are normally most welcome at the lookout although, rarely, when an incident is ongoing or when training is taking place, this may not always be convenient and the duty watchkeeper may need to ask visitors to call back later. The station holds 3 formal Open Day events during Bank Holiday weekends during the year: these are usually the weekends of Easter (4 days), late May Bank Holiday (3 days), and August Bank Holiday (3 days).
Access

The lookout is on the SW Coast Path and is also accessible by a rough track from Worth Matravers.

Local Hazards
When firing is taking place at the nearby Lulworth Ranges a red flag is flown from the nearby flagstaff, and flashing red lights are illuminated on each side of the lookout building. Normally, firing takes place every weekday 0930 - 1700; plus most Tuesday and Thursday nights until 2359; and occasionally at weekends. The ranges are often inactive during holiday periods. Depending on the calibre of weapons being used, the danger area is often less - in both range and spread - than that marked on local navigation charts and OS maps. For information on today's firing times and danger areas, please contact the station, using 01929 439220 or VHF Ch 65.
Operational capability
This station has Declared Facility Status
This station reports to JRCC Fareham
Current weather and sea conditions are available by telephone or on VHF Ch 65 during watch hours
Defibrillator Available:
Mounted externally available 24 x7 call number displayed on unit for instructions
Station Telephone:
01929 439220
Visual Watch:
Yes
Radar Watch:
Yes
NAVTEX:
No
AIS Watch:
Yes
CCTV Watch:
N/A
DSC Watch:
Yes
Radio: Listening watch on channels:
08
16
Radio: Channels in use (call direct not via ch 16):
65
Radio: Channel 00:
Listening watch and ready to transmit as authorised by Coastguard
Station Call Sign:
St Albans Head NCI
Other Watch Information:
Lookout telephone 01929 439220 (voicemail outside our normal opening hours).
Visual Horizon:
19.47 NM
Radar Horizon:
22.81 NM