WEYMOUTH PAVILION ILLUMINATED IN BLUE AND GOLD TO CELEBRATE 25 YEARS OF THE NATIONAL COASTWATCH INSTITUTE. 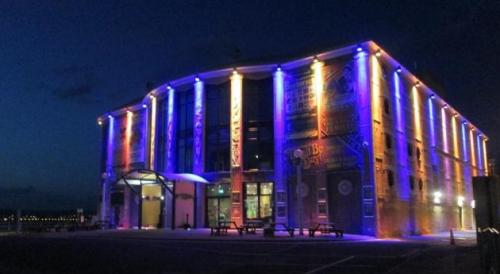 2nd August 2019. To celebrate 25 years of the National Coastwatch Institution’s contribution towards saving lives at sea, the lights illuminating Weymouth pavilion have turned blue and gold (the NCI's colours) for a week.

The lights, in NCI’s colours, shone out across the Jurassic coast until Sunday August 4th. There was also a display in the foyer by NCI Portland Bill and members of the Portland Bill National Coastwatch team were present after shows to talk to members of the public about the role of the NCI. A charity stall was also held on The Esplanade earlier in the week. The charity is manned by volunteers and receives no official funding, but instead relies on charitable donations.

The Portland Bill station opened in 1997, following a fundraising campaign that led to the station - originally built in 1939 - being refurbished. The lookout is manned in four-hour shifts from 7am until 7pm, 364 days each year, with volunteers remaining on standby outside of operational hours, including Christmas Day.

According to a National Coastwatch representative, a total of 65 volunteers give up their time to keep a watchful eye on the surrounding coastline - devoting over 9,400 hours to the community each year. Last year the team logged 15,962 vessels and was involved in over 160 incidents. As well keeping a watchful eye out for seaborne vessels, the volunteers also look out for walkers, climbers, horse riders and anyone else using the land and sea areas around Portland Bill.

Portland Bill Coastwatch is part of Dorset Search & Rescue and works closely with the National Maritime Operations Centre in Southampton as well as the Search & Rescue Helicopter and RNLI.

Photo courtesy of The Dorset Echo