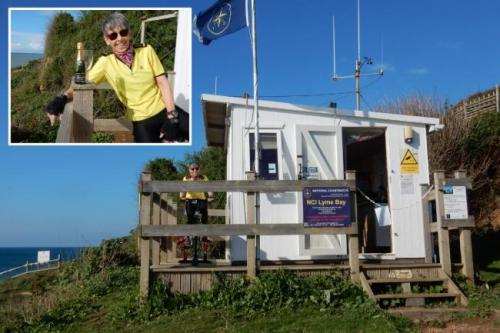 14th November 2020. A volunteer who gives up her time to keep an eye on the coast and keep people safe is on her bike for a major fundraiser.

Judy Clarke, Station Manager of the National Coastwatch Institution station at Lyme Bay, is on a virtual cycle ride from Burton Bradstock to Venice to raise money for the Lyme Bay station. The original lookout at Burton Bradstock was destroyed in a storm in 2014 and the NCI volunteers have been working out of what is essentially a converted garden shed ever since. All NCI stations are responsible for their own fundraising but with the coronavirus pandemic putting a stop to all but a few events this year, ideas were hard to come by. That was until Judy came up with the idea of a cycle ride of 1,000 miles in 100 days, all from her own garage.

Judy said “The current lookout requires updating and improving. We are an emergency service and considered key workers. We are in the business of saving lives and we need to be as efficient as we possibly can. I’m so thrilled because I started off thinking that maybe we could convince all the watch keepers to give a pound each but we’ve achieved so much more than that."

Mrs Clarke had not ridden her bike for nearly four years before taking on the challenge and now, just a few months down the line, she has cycled around 800 miles. The ride has currently raised close to £3,000 and Mrs Clarke still has one week to go before she reaches her final destination of Venice. She added: “I’m so grateful to everyone who has raised throughout the country, it hasn't necessarily just been local people. I’ve taken the bike to the lookout on occasions and often people have asked me what I am doing and have then donated. Everyone I know who has donated, I have taken down their email addresses and send them regular 'jokey' updates and newsletters about where my 'journey' has taken me”.

Judy is covering the virtual miles and said “ I have sipped bubbles in the Champagne region and visited historical sites in Verdun. I'm currently ‘in’ Milan and thinking I might go to the opera tonight. There’s no Covid in my parallel universe.”