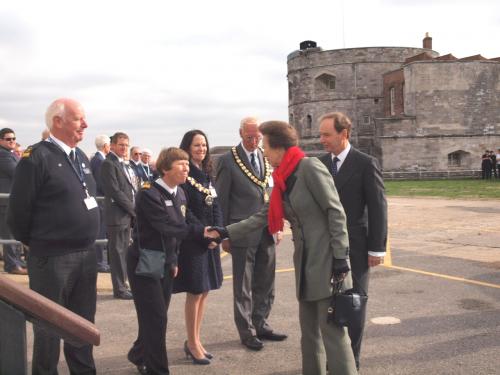 25th October 2018.  HRH The Princess Royal climbed a 100 ft ladder yesterday to see for herself the measures taken to maintain safety on the waters of the Solent, one of the busiest waterways in the world.

The Princess is patron of the National Coastwatch Institution and was at NCI Calshot Tower where a team of volunteer watchkeepers maintain a daylight surveillance of the Solent and Southampton Water, all year round. But the tower’s viewing platform is near the top of the tower, 100 ft above ground level, and the only means of access is by way of the vertical ladders inside the tower. But once on the platform the Princess shared the panoramic view which watch keepers have daily, a 360-degree view over both the Solent and Southampton Water.

After visiting the tower, the Princess met six groups of watchkeepers and presented epaulettes to the new deputy station manager and five-year certificate to four watchkeepers before unveiling a plaque which will be fixed to the tower.

The tower itself is situated on a mile-long sand and shingle bank at the seaward end of Southampton Water and has been part of the National Coastwatch network of stations keeping a visual eye on Britain’s coastline and assists in the protection and preservation of life at sea around the coast. It is owned by Associated British Ports and was built in 1973 as part of the port of Southampton’s radar chain before serving as a Coastguard lookout until the 1990s, becoming an NCI station in the summer of 2010. Like other look-out stations around Britain’s coast, it is manned by a team of fully trained and dedicated volunteers who keep a daylight watch up to 365 days a year. From the tower, watch keepers have a view of about 11 nautical miles over the Solent and Southampton Water which is the approach to one of the country’s busiest ports with constant commercial traffic which includes the world’s largest cruise ships, container vessels and oil tankers as well as ferry services. Over 6,500 major vessel movements were logged by the watchkeepers last year, although their priority is to keep a look out for more vulnerable craft particularly in summer when thousands of yachts take to the same waters. More than 200 yachts could be within sight of the tower on any day in the summer.