CAPE CORNWALL HAS A BUSY WEEKEND AT THE ST BURYAN RALLY 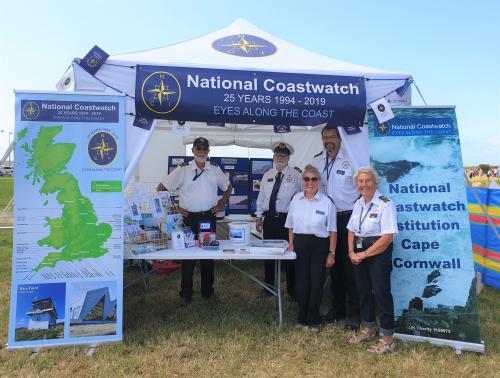 The rally is organised by the St Buryan Agricultural Preservation Society and takes place at Trevorgans Farm where there were impressive displays of steam engines, horses, vintage cars and more.

The volunteer watchkeepers from the National Coastwatch Institution station at Cape Cornwall had their stall at the rally over both days where they were able to tell the many visitors about the vital role they play in the SAR community. The stall was very busy and the Cape Cornwall team were also able to promote the charity’s 25th Anniversary. They even managed to recruit a new member for the station and raised over £500 for the station’s funds.

Station Manager Richard Saynor said “Many thanks to, Peter Munday, Graham Oakley, Shaun O'Loughlin, Richard Saynor & Nicole Saynor, Hugh Thomas and Peter Winterson who put up and took down the Gazebo. Thanks also to Liz Bix, Elizabeth Hemphill, Dymphna Hermans, Pete Munday, Graham Oakley, Shaun O'Loughlin, Jocelyn Pardoe, Jonathan Rothwell, Mark Shaw, Jeremy Spanton, Pat Stanton-Nadin, Graham Tucker, Jennifer Tuson, Ian Watling, and David Wraite who manned the stall over two very hot days. And last but by no means least Elsie Ash who roamed the rally with her collecting bucket. I would also like to give a personal thank you to all who helped on the stand as your help allowed me to spend time with my wife, friends and the horses to put on a display of pony driving”.

At the same time as the team were manning the stall on Sunday, the duty watchkeepers at Cape Cornwall were monitoring the annual Brisons swim, a 1.5Km swim that takes place from Priests Cove underneath the station.